PEEKABOOS®
Starting as a happy accident, PEEKABOOS® Ponytail Hats found their way into the world during a winter getaway in northern Wisconsin. Their founder, Danica, was trying to make a standard hole-free hat without the use of a pattern.  She wound up with a goofy, bright pink holey-hat. First, strictly for entertainment's sake, Danica tossed the hat on while tossing her hair out of its inadvertent gap... and then, it clicked. The brand name came next, an idea from her mother. PEEKABOOS® Ponytail Hats.  Such a problem-solving idea, and so surprising it wasn’t in the market yet!

A college student at the time, Danica held a part-time position in the UW-La Crosse campus computer labs to decrease the tuition bill. Still wearing the bright pink “oopsie” hat into the labs each day (after all, what college student could resist such a quick fix for bedhead?), the requests to have a PEEKABOOS® ponytail hat of their own began to pour in from fellow students and professors.  She filled some of those orders, but while pursuing her Chemistry and Business degree at the time, Danica hardly found enough time away from books to launch and maintain a company.

Shortly after graduation, she traveled extensively for her first job out of college.  She was still sportin’ the original ponytail hat and was still receiving hopeful order requests. With long flight hours to endure each week, Danica used her downtime to brainstorm. With a fine-tipped Sharpie marker in hand, on the back of an airplane napkin, she took a deep breath and sketched a logo. This is the logo still used today!

The seed had sprouted but there was more work to be done before PEEKABOOS® would have their first sales season. The conversion consisted mostly of organic growth from long uninterrupted hours.  Perfecting the product to a consistent, maximum quality ponytail hat required patience, resourcefulness, and many rejected prototypes. The ideal product was finally achieved: a fun, smart, warm, comfortable, and stylish PEEKABOOS® ponytail hat.

Take a look below to follow the evolution of our ponytail hats.  Our original styles incorporated visible openings or slits. These were well liked by our customers (they were the first knit ponytail hats on the market and the idea alone solved problems for our wearers), but we knew we had something even better in mind.  We were determined to deliver more versatility and a product that could also be used without a ponytail, and without the discomfort of an unsightly hole in the back of your hat!  In 2014 we released our first novel patent-pending designs, including the most popular, our Classic Cable hat which features three openings disguised within a cable knit twist. 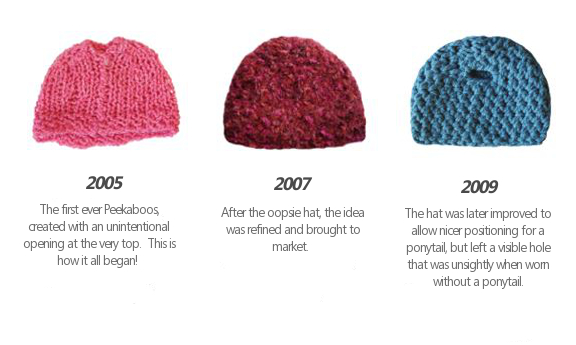 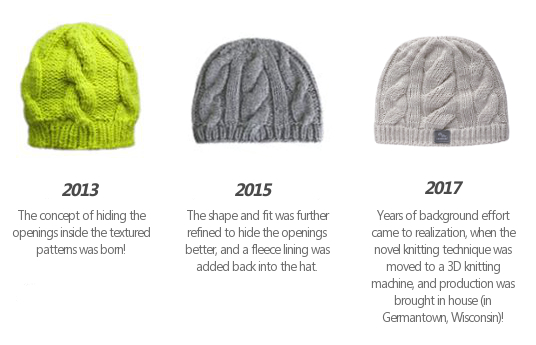